The unfortunate events in Charlottesville, VA highlight the importance of speaking up and calling out hatred, racism and bigotry wherever it may feel emboldened enough to step out of the shadows.

We, as a nation, still heal from the wounds of slavery and racism that almost tore our country apart and the world still bears scars from a world war fought to defeat the Nazis and everything they stood for.

I was fortunate to be able to take part in a Holocaust Education Remembrance Trip this summer and travel Europe with a child survivor and others committed to ensuring the next generation does not forget.

We came face-to-face with some of the atrocities of WWII and the personal stories of both the wickedness and resilience of the human spirit. We saw both the worst of humanity and the courage to stand up against such evil – something that we all hope defines us as human.

Below is the first in a series of entries of our journey to remember:

When we arrived in Germany after our long flight, we immediately headed for the heart of Berlin to see firsthand how German society has addressed the Holocaust and its lasting devastation.

Our first stop was a Soviet-Era memorial to the war. It helped to show the different portrayals of the war in East vs. West Germany and also showed the evolution towards an honest account of what actually happened. 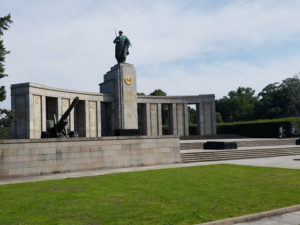 Of note was the fact that the Soviet memorial simply spoke about the victims of war very generally and its focus was on the Soviet troops who died. It also noted the start of WWII as the year when the Nazis and the USSR turned against one another. There was, of course, no mention of the war that had been going on while both fought on the same side.

As we learned over the course of our trip, the memorial is typical of the many Soviet-Era monuments erected in Soviet-controlled countries after the war. All simply mention ‘the victims’ of war and never note the specific atrocities against Jews or any other group. Most are massive in size and seem to be intended as much to intimidate the occupied nation as to remember those lost.

Traveling further into downtown Berlin, we started to see newer monuments, prominently located in the heart of the city, specifically dedicated to many of the groups persecuted. 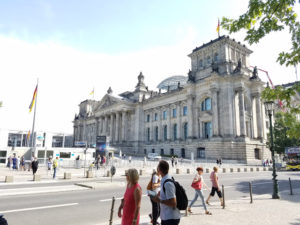 We saw a monument near the Reichstag (the German Parliament building that when set on fire, Hitler used as an excuse to seize sweeping power in Germany). In a key location in the city, the German people have dedicated a memorial to the Sinti and Roma (gypsies) that the Nazis sent to concentration camps and death camps.

Next, we visited the memorial to the Jewish victims that is located across from many of the embassies in the center of Berlin. Spread over a huge space, it is difficult to get a true feel for the memorial until you walk through it and feel how large some of the concrete blocks are. 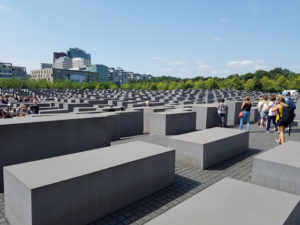 While not specifically noted, many speculated that the concrete blocks might symbolize Jewish prisoners in line for roll call, some offered that they may signify many coffins or other symbols of death. As the artist who created it purposely did not describe his intention, it is left to each observer to decide how it impacts him or her.

As we left the square, we came across another memorial to homosexual victims, one of the first groups to be isolated, attacked and killed under the Nazis.

In total, you left the immediate area with a clear understanding that, in placing many of these memorials right in the heart of Berlin, the German people have decided to own what happened and to be reminded of it every day. 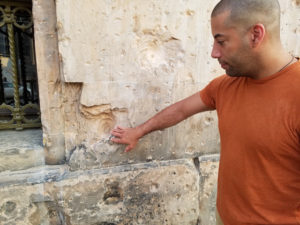 Walking next to the Berlin Wall, we saw the evidence of war everywhere. Many buildings still have bullet holes and damage from the weapons of war. At the wall itself, you could easily imagine what it must have been like in occupied East Germany after the war. Having just pushed out the Nazis, residents were next ruled by a controlling USSR that limited freedom and any possibility of escape.

That evening, we strolled past the infamous site of the book burning, where the Nazis burned approximately 20,000 books. As we are well aware, limiting access to information or knowledge is a hallmark sign of an oppressive regime.

The next day began with one of the most powerful stops on our trip. 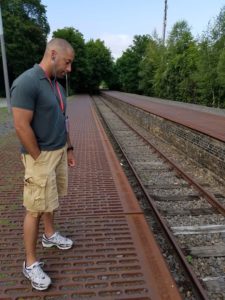 Driving into the suburbs of Berlin, we entered into a relatively small town. After stopping, we casually walked to the local train station. It is a beautiful little building, nestled in the middle of luxurious homes in the area.

Next to the train station is a monument that remembers the thousands of Jews who were marched through the streets of the small suburb to the train station. There, they boarded trains bound for concentration and death camps. In a system of deception and insult, each victim was required to purchase a ticket, even though transport would occur in a railcar designed for livestock. For those who could not afford it, wealthier Jewish families had to chip in to cover the cost.

While powerful itself, it was the walk up to the platform, Platform 17, that burned you at your core.

There, you saw the tracks and the platform where thousands of Jews were loaded onto the cars. 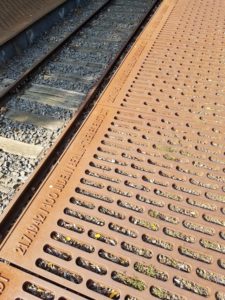 For each transport, there is a metal grate which has the transport date, the number of Jews transported, and the location. 50,000 Jews boarded trains for the camps from that site… Words cannot describe the feeling and pictures capture only some of the sorrow and anger.

When we finally left, we closed out the day by visiting one of the early prisons in Berlin that the Nazis used to torture political enemies.

There, we had the unbelievable experience of sitting with and hearing from the daughter of a former Nazi SS high-ranking officer.

A child at the time, she described her story.

Never remembering her father as a child (he was already in hiding and then captured and imprisoned by the Soviets), she had only heard positive stories of him growing up. Each described him as a war hero who simply fought for his country and was captured.

She began a campaign to have him freed and after he died in jail (where she was almost never allowed to visit him), she continued her work to find out why he was kept as a prisoner.

Her efforts led her to discover that her mother, other family members and many in the community had disguised his true role for many years. From old family photos, documents, and the evidence provided to her from the authorities, she came to realize that not only was her father guilty, he was one of the prime orchestrators of terror.

It was impressive to hear of and see her strength in continuing to push, even when it meant being ostracized by her family and receiving threats from newer Neo-Nazi groups. Watching a conversation between a child survivor of the Holocaust and the child of a perpetrator also gave you hope that we can do better, be better if we choose.